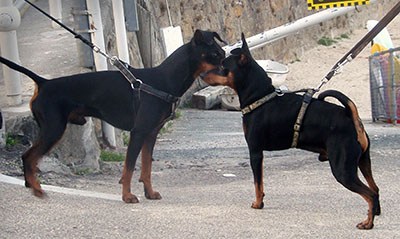 Most everyone has seen the videos of President Trump and his inappropriate handshakes that go on for way too long!

A normal handshake, between two ‘consenting adults’ is brief. A handshake is an introduction: You don’t know the person. You don’t death grip their hand. You don’t hold on for too long. You introduce yourself, and then you let go. Both parties participate, briefly, and then release. When a physical interaction with someone you don’t know goes on for too long, it’s awkward. It’s uncomfortable. It’s not appropriate. It causes tension.

The same is true for dogs!

Over and over again, I have seen the same scenario play out: Two dogs on leash, led by their owners, meet for a nose-to-nose intro. These dogs may have pulled toward each other to meet — curious, unsure — or they may have not been too keen on meeting but their owners encouraged it. They sniff, face to face, and then… 1… 2… 3 seconds pass and BOOM! Snarls, snaps, aggression! The embarassed owners are disheveled and quickly go the other direction. Chalk it off to a bad chemistry?

Nope! Chalk it off to too much pressure. A face-to-face intro for a dog is unnatural and during every second that passes, the tension builds! It’s like clockwork. It’s so predictable. Repeat: It’s TOO MUCH PRESSURE.

Why does this happen? Dogs are not meant to meet, restrained, on leash, face to face. If you watch natural dog behavior in an off-leash setting, you will see that dogs approach each other face to rear, and they typically don’t spend too much time doing so. When dogs “dwell” it is considered bad manners, even confrontational. Sometimes that will elicit corrections. 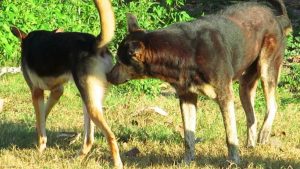 Especially with rescue dogs, or undersocialized dogs, they do not know ‘appropriate dog behaviors’ and so it falls on us – as the humans – to be their leaders… to show them the right way!

Ideally, dogs should never meet face-to-face for a first encounter. For undersocialized dogs, I even recommend “setting up” the introduction: Presenting one dog’s rear to the other and then swapping. All interactions should be brief and when the dog successfully sniffs appropriately, praise or reward: Good! Yes! — and walk away!

If you do allow a nose-to-nose introduction, it is especially important to stick to the “3 second rule”: Count to 3, praise, and walk away! Of course, every dog is different, so if you notice any signs that your dog is unsure or tense — such as stiff body, hackles raised, crinkled forehead — end the introduction sooner than later on a positive note!