What do you do when you know that many, many dogs are going to be euthanized at high-kill shelters in San Bernardino, CA, and the transport vehicles that usually bring dogs to Seattle are broken down or fully booked?

If you’re Jenny Nordin, founder of Dog Gone Seattle (DGS), you rent a van, set it up with crates and supplies, and drive 2,376 miles to rescue as many dogs as possible and bring them back to Seattle. What else?

Jenny’s dilemma, and master scheme, began before the 4th of July this summer. The holiday always causes major crowding at animal shelters throughout the country as dogs frightened by the fireworks bolt from their homes and are picked up as strays. To make room for them in the shelters, many of the current residents—perfectly wonderful, adoptable dogs—are euthanized. It’s a little known and tragic fact. Letting that happen was just too heartbreaking. So Jenny’s first step was to email her DGS board members. Was anyone up for a little road trip to rescue dogs? Ashlyn Kauh said “I’m in. We have to do this!” and Jenny had her sidekick.

“Next I needed to rent a van that could hold lots of dog crates. I called and called. No one could promise me what we needed, but I kept calling until I found one.”

Choosing just 18 dogs to save

“We had room in the van for about 18 dogs, and it was awful to have to choose which ones we’d take,” says Jenny. “We knew that the dogs we passed over were most likely going to die.”

But choose they did—dogs of all shapes and sizes and personalities. While she and Ashlyn headed south in the van, DGS rescue partner Terri Raymond in San Bernardino was hard at work on her end. She rounded up all the chosen dogs and got them to the vet for the health checkups they needed to join DGS.

“The day before we arrived, Terri called to say that two little spaniel puppies had just been dumped in the shelter parking lot. She asked if we would take them and we said ‘yes.’ We were up to 20 dogs.”

Jenny and Ashlyn left Seattle at 2 p.m. on Sunday, July 8, timing it so they’d get to San Bernardino right when the vet’s office opened on Monday morning. “We drove straight through, just stopping four times for gas,” recalls Jenny.

“There were horrible fires in northern California, and it was really hot in the Central Valley. When we got to San Bernardino at 7 a.m., it was already 90 degrees. You could see the heat coming off the ground.”

Ashlyn remembers that one of the hardest parts of the trip was waiting at Advanced Pet Care, the vet, for the dogs to come out of their health checks, one by one. “That took 3 hours, and it was hard to be patient. But they were finally all
out and ready to go,” she says.

Nineteen of the dogs were loaded into crates in the van and given ice water. Petal, one of the spaniel puppies, got the honor of riding shotgun between the two front seats. 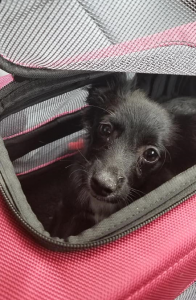 The trip back to Seattle took 24 hours. “It was 125 degrees in the Central Valley, so we couldn’t let the dogs out of the van at all, and couldn’t turn off the engineor the air conditioning,” Jenny says. “We had to stop along the way to clean up some diarrhea and vomiting, and three of the dogs were determined to break out of their crates. But otherwise things went smoothly.”

But there was still one “little” detail to take care of—what to do with the 20 dogs once they got back to Seattle. “Ashlyn drove for eight hours straight while I was on my phone, finding foster homes for the dogs,” Jenny says. “Our foster
community really came through, and I had ‘soft landing spots’ arranged for the dogs by the time we pulled into Seattle.”

Jenny, Ashlyn and the van full of dogs finally reached Seattle at 12:30 p.m. on Tuesday, July 10. The whole trip had taken a little less than 48 hours.

Since landing in Seattle-area foster homes, the dogs have been recovering from shelter life, learning basic obedience skills, and attending adoption events to find their forever homes. A month after the rescue mission, 16 of the 20 dogs were already adopted. Now, just two – Luna and Chip  – are waiting for forever homes.

Newfound appreciation for our transport partners

“The trip was an incredible experience,” Jenny says. “I think we did a great job setting up the van and powering through. But I definitely have a greater appreciation for what our transport partners do, week after week. It’s a physically and emotionally exhausting job! I won’t say we will never do it ourselves again, but hopefully we won’t do it any time soon!”